Perhaps you’ve noticed even the most conventional of grocery stores have  expanded their grain selections from white rice and brown rice  now to include quinoa, barley, amaranth, and even freekeh. These ancient grains have gained popularity over the last few  years. The number of recipes including these long-time ignored grains has inspired people to try new varieties.  Since they are filled with more nutrients, fiber and protein than plain white rice, they have presented us with   good reasons to include them in our meal routines.

Gear up for yet another change in your grains. Sprouted grains now are slowly gaining popularity.  And they are not just another fad; the industry believes that they   will represent a dominant trend in the next couple of years in the food marketplace. They will appear as ingredients in baked goods; they will also be  sold in bulk as  a money saving option.

Sprouted grains are made from whole grains. They are the whole grains undergoing  a  transition phase from seed to plant. This process involves the germination process of the seed done under controlled environment so that the sprouting is stopped at just the right time. If the seed continues to sprout into a grain grass, then it is no longer edible since it is passed the point of  digestibility for humans.  Sprouted grains  generally offer the same or better nutrition benefits than whole grains.

When a grain is sprouted, this  means some of the carbohydrates present in that grain are used as energy to grow the sprouts; therefore, they  concentrate the amount of protein, fiber and other nutrients in the grain. There are studies analyzing the possibility that this process also allows for an easier-to-digest  grain with greater nutrient availability for us.

Nutrient availability varies  for each grain, but sprouted wheat, for example, has been shown to contain more fiber and vitamin E, and sprouted wheat flour  contains possibly four times as much folate as regular wheat flour! Since the popularity of sprouted grains has steadily increased, so has the research into their additional health benefits. Within the next few  years, there could be more data available to support our transition to sprouted grains – or not. In the meantime, it is not a bad idea to start experimenting with sprouted grains in your own kitchen. Include them  as an ingredient in your cooking or just add some variety or varieties to your menu.  Take sprouted brown rice, for example. Although there are some websites explaining how to sprout your own grains at home, beware: The technique involves soaking and rinsing the grains  with  warm water several times a day. These  conditions are optimal for bacterial growth and could potentially be present in enough quantity in the final sprouted grain to induce food- borne illness. Therefore, follow sterilization techniques and cook sprouted grains fully when trying out those methods.

Or, more conveniently, you may purchase already sprouted grains which is a good idea for beginners. The following recipe uses store bought sprouted rolled oats. Rolled oats, steel cut oats, or other cracked oats can’t be sprouted since their hull has been removed. Oat groats are usually used in commercial production and deliver a safe and reliable sprouted oat product. The recipe also calls for a fruit puree for which you can use what you have on  hand, or make a puree  to fit a special occasion. Pumpkin puree is a great option for –   a taste of fall, or use apricot puree for a more summer- like fruit bar. Enjoy creating your own versions, and let us know how you’ve delighted in baking with sprouted oats! 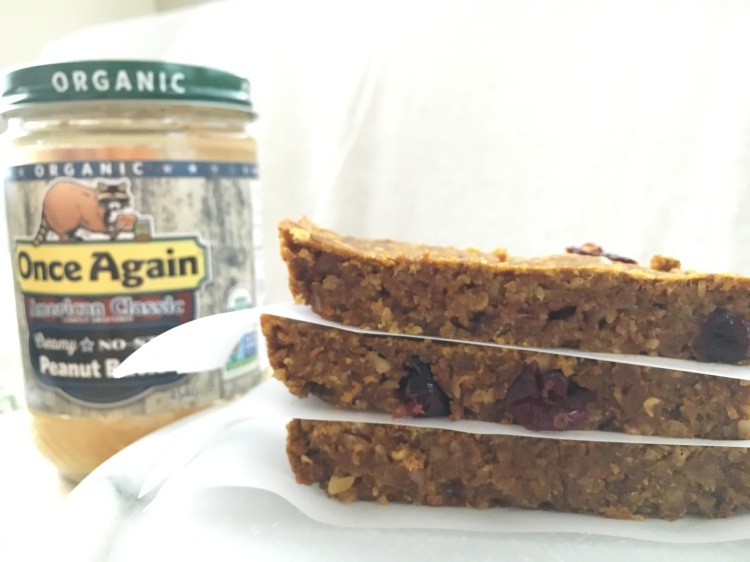 Recipe and post created for Once Again Nut Butter, sponsored.